The Declaration of Gruppo T

The Declaration of October 1959 can be considered as both a theoretical platform and a technical manifesto of Gruppo T.

It was published in January 1960 in the occasion of the first “manifestation” – as they used to call “exhibitions” – of Gruppo T, “Miriorama 1”, at Galleria Pater in via Borgonuovo 10, Milan.

In the Declaration one reads: “Every aspect of reality, color, form, light, geometrical spaces and astronomic time, is a different aspect of the way SPACETIME is given, or better: different ways of perceiving the relationship between SPACE and TIME. Hence we consider the reality as a continuous evolution of phenomena that we perceive in variation. Since reality, intended in these terms, has taken the place of a fixed and unchanging reality in the consciousness of men (or solely in their intuition), we recognize in the arts a tendency towards the expression of reality in terms of variation [the vitalism of Henri Bergson].

Considering the artwork as a reality made of the same elements that constitute the reality around us, the same artwork must be in constant variation. Thus we do not refuse the validity of media such as color, form, light and the likes, but we reappraise them by inserting them in the artwork in the real situation where we recognize them in reality, which is in a constant variation as an effect of their reciprocal relationship [the phenomenology of Edmund Husserl and the relationalism of Enzo Paci]”.

The word “miriorama” is the Italian spelling of myriorama and means “never-ending visions”, from the Greek “orao”, to see, and “myrio”, which stands for a nearly infinite quantity. The word was proposed to the group by the painter Enrico Bordoni, fond of esthetical curiosities, and it indicates an optical toy which used to be very popular in the 19th century, made of a set of illustrated cards depicting a figurative motive such as a landscape which could be arranged and re-arranged, forming different pictures.

Miriorama, the group and solo manifestations of Gruppo T, are numbered progressively from 1 to 14 in order to underline the continuity of a shared program which led their work for many years.

Miriorama 1 to 6 were all organized at Galleria Pater in Milan. Miriorama 6, 1960, is their second group exhibition, which was marked by Grazia Varisco joining Gruppo T. 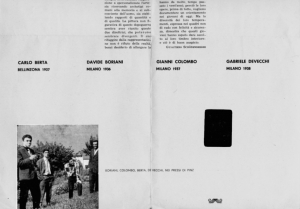 The Dadaist spirit of Gruppo T

Below we reveal a secret of the Dadaist spirit that hovered in the group, triggered by the prohibitive cost of image processing back in those years.