Arte programmata. The exhibition in US

After Milan, Venice and Rome, the exhibition Arte programmata travelled abroad, to Düsseldorf, London, and the US, in collaboration with the Smithsonian Institution.

The catalogue was in a similar but larger format compared to the one of the exhibitions in Venice and Rome. It was printed by Officina d’Arte Grafica Lucini and page-set by Enzo Mari, with photographs by Ugo Mulas. It featured texts by Riccardo Musatti and Bruno Munari.

After the exhibition, several works by Gruppo T became part of the permanent collection of MoMA New York.

Robert Musatti wrote: “In April of 1962, Giorgio Soavi, art consultant to Olivetti’s Advertising Department, and I went to a workshop in Milan to see some objects made by a group of young artists, known as Group T. It was Bruno Munari, the designer, who unfastened us from the office and took us there. Had we asked him to produce an example of vitality we couldn’t have been more satisfied. Munari is not a temperamentally introspective artist; that morning he was on the move, like the objects of Group T he was showing us. Each of the young artists extracted, from a mountain of wires and little boxes, the presentable piece, the one in best shape. It was a delicate confusion, befitting the youth of the artists. I seem to remember that at a certain point one of them said, ‘There, you see, this object is mine… no, excuse me, that’s mine, yours’s is down there’. An immense wall of expanded-plastic cubes moved like an excited sinusoid; then, an instant later the crisis: burnt-out tubes, pliers, switches, screwdrivers, limping motors, iron dust, magnets. All objects for our amusement. The first impression was joyous and positive. It was then we decided to hold a small exhibition of these objects in motion, the first exhibit of Arte programmata”.

Nel testo di Bruno Munari si legge: “[…] As times change, man’s sensibilities change with them. A static image, unique and final, does not contain that quantity of information sufficient to interest the contemporary viewer, who is accustomed to life in an environment subject to simultaneous and multifarious stimuli from the most varied sources. This situation gives birth to programmed art, which has as ultimate aim the production not of a single definitive and subjective image but of a multitude of images in continual variation. The ‘programming’ of these works, which necessarily because of technical reasons and limits are neither paintings nor sculptures, is to be understood in the sense that each artist choses a particular material and the structural, kinetic, and optical combinations the he considers most suitable for the embodiment of his artistic intuition.

Consequently, in keeping with the rules of Good Design (in the same way as a fish ha the form of a fish and a rose the form and substance of a rose) the object he makes will have its most natural form.

In these works of programmed art the fundamental elements, which along with the kinetic and optical combination will give life to a continuous series of images, are in a free state or are arranged objectively in geometrically ordered systems so as to create the greatest number of combinations, often unpredictable in their mutations but all programmed in accordance with the system planned by the artist.

A work of programmed art is thus to be observed and considered not as an object representing something else, but as ‘the thing’ in itself to be observed. It is a field for happenings, an area of a previously unknown world of creativity, a fragment of a new reality to be observed in its continual variations”. 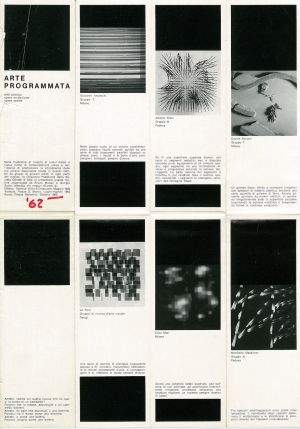 Arte programmata. The exhibition in Venice

After Milan, the exhibition Arte programmata travels to the Olivetti show room on San Marco square in Venice (July-August 1962) 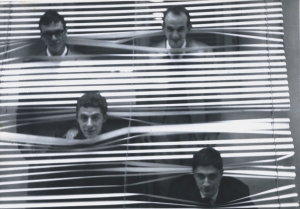 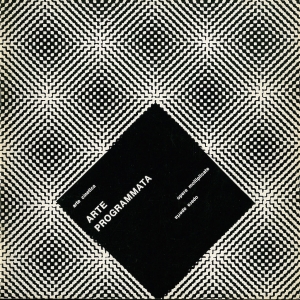