Bit shift study is a constantly evolving object traversed by a black and white pattern. The object is made out of an array of pcbs (printed circuit boards) designed to act as heating panels and coated with a thermochromic film. The 10 × 10 cm panels are chained together and react to the behaviour of their neighbours. Following a simple input/output rule, together they generate an ongoing pattern which can be seen to flow down the chain. The individual components assembled together expand to form a single entity as the visual property becomes visible. Inspired by early digital cellular automata, life-like properties are generated by simple rules embedded into the very nature of the basic components. Information is passed from parent to child panel, as they heat and cool down.

Research context and references
I focused primarily on Devecchi’s experiments with transient and immaterial phenomena, as in Scultura da prendere a calci or Superficie in vibrazione. His work with ongoing and disappearing processes attracted my interest and I initially experimented with thermal processes by cooling pieces of metal to sub-zero temperatures, so as to get natural frost to grow over the piece. As I experimented further I found the process impractical and difficult to manage; keeping thermal processes in mind I stumbled upon Devecchi’s Ambiente cronostatico, which imprinted the shadows of visitors onto walls painted with uv reactive photographic paint. This led me to focus my attention on thermochromic pigments, temperature sensitive compounds which go from opaque to transparent above an easy to manage temperature threshold. Superficie in vibrazione—a work which requires deep contemplation— was my starting point for the final project. My core practice focuses on ongoing processes, activated by technological means, so I wanted to create something that could set the temperature of the pigments, in order to switch them on and off in a controlled manner. Printed circuit boards—the physical medium of technology—are used as the canvas for the project, and they create the desired visual effect by visualizing the heat that is a by product of the electronic process. On a different scale, the boards have their own internal logic that stays out of reach: we can only ever see a limited part of it. I see it as a metaphor for the pervasive use of computing today, shrinking out of sight till it is invisible.

Technology and media
The project is made of a number of identical modules chained together. The 10×10 cm pcb were laid out with one logic side with a simple microcontroller that senses the input from the parent module. If the input detects a high signal, a power transistor is activated for a fixed amount of time. After a fixed delay the output side of the module issues the high signal to trigger the next child module. The root-level module (the first one in the chain) includes modified firmware that sends trigger signals to the output side at regular intervals to start the sequence. The functional side is simply designed with a single trace zigzagging over the surface that acts as a heating element via the resistance of the copper substrate. The pcbs were manufactured with a white silkscreened finish. A final layer of clear varnish mixed with black thermochromic pigments covers the white PCBs: when they are heated above their temperature transition threshold they become transparent and the black layers become visible on their surface.

License
All contents are released under the MIT license. 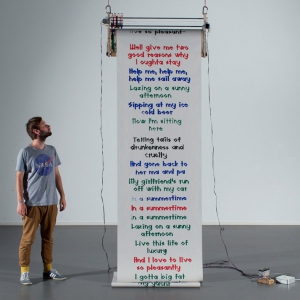