The exhibition at galleria Azimut

Albisola, summer 1959: Piero Manzoni proposes to Anceschi and Boriani to participate in the organization and the activities of galleria Azimut. Albisola, besides being the holiday retreat of Manzoni family, was an important center for experimentation in ceramics, with an artistic scene at international level.

It is also the place where the Linee (“Lines”) by Manzoni were presented for the first time. The “Linea lunga 19.93 metri” (“Line 19.93 meters long”) and the other shorter lines are exhibited in this space called Il Pozzetto Chiuso in Albisola Mare between 18 and 24 August 1959.

Anceschi tells about it: “In August 1959 I was on holidays with Davide Boriani in Pietra Ligure. Actually it was a business holidays, since we were preparing the polymateric paintings for the exhibition at galleria Pater scheduled for September. And I remember that Boriani was preparing strange mixtures of ingredients to paint what he defined ‘Craquelées’, which several years later Burri, appropriating the idea, would name ‘Cretti’ […]. Precisely on 18 August (because this date is by now part of history of contemporary art), I combined a visit to my girlfriend with the opening of an exhibition Piero had previously told me about. At the galleria del Pozzetto Chiuso he exhibited for the first time his brand new ‘lines’. I must say that, with his proverbial art of improvisation, Piero had pompously renamed galleria del Pozzetto Chiuso a building that in Salento one would have called a ‘trullo’: a round shed for tools, moreover lost among the olive trees. He had painted the inner walls in lime, the space was lit by a simple bulb hanging in the center, and on the floor made of dirt he had put several boxes of ‘lines’. Instead of having a roll in the hay, that time I spent the afternoon helping my friend, who, maybe for the only time, unsealed the longest of “lines” (19.93 m) and unrolled it along the curved and windowless wall of the hut: he spread it at eye level from the right jamb touching with the left jamb of the door. Yet 1.515 meters were left. Hence Piero cut with scissors the exceeding part and gave it to me as a present, accompanying the gesture with one of his typical stifled giggles.

If we add to the 18.415 meters left the size of the door allowing the visitors in, whose width could be estimated in 80 cm including both jambs, the circumference of the room was 19.215 m, which divided by 3.14 gives a diameter of 6.12 cm. Which sums up in facts to a quite large shed for tools.

Since then the fragment of the first (and maybe the only one) line shelled and exhibited has followed me in every house, stored in a cardboard tube, at first shared with the yellow poster of the exhibition of Gruppo T in Japan, and then getting a tube on its own”. (Interview with Giovanni Anceschi, Milan, 9 November 2001).

In September the first issue of the magazine Azimuth was launched, and the galleria Azimut was opened to the public on 4 December 1959 with a solo exhibition of Manzoni, “Le Linee di Piero Manzoni” (“The lines by Piero Manzoni”).

Anceschi, Boriani, Colombo and Devecchi collaborate with Manzoni and Enrico Castellani in the activities of the gallery and produced also parts of the furniture, such as the lights. Here they meet, among others, Heinz Mack, Enzo Mari, Manfredo Massironi and the group Motus (then GRAV). The group exhibition at galleria Azimut opens on 22 December 1959. 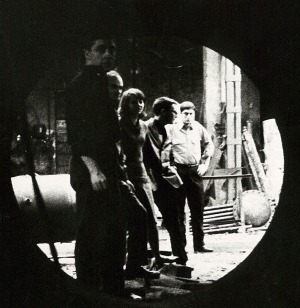