Davide Boriani (Milan, 1936). Since the foundation of Gruppo T he has been constantly engaged with it and his activity is strongly intertwined with the one of the group. Since 1956, Boriani exhibits his works produced with a variety of techniques, both traditional and experimental. In early 1959 he produces his first “Opere in divenire” with a monochrome mixture that progressively changes the image while it dries up. In the same year, with the aim of overcoming a tendency of resetting visual arts, he introduces the realization of four-dimensional artworks, where time and case play a fundamental role: images are no longer fixed but they constantly change through actual movements and interventions of the viewers on the artwork. Gruppo T is conceived around this working hypothesis.

He produces the first interactive environment where the user is at the “center of the work” as an active and irreplaceable presence (“Spazio + linee luce + spettatore”, Paris 1964). Following this work, he realizes a number of interactive installations and environments produced either in collaboration with other members of the group or individually, from 1964 to 2013.

The year 1968 marks a crisis in the activities of Gruppo T: the paths of its components diverge. Boriani takes a critical position towards the art system. He continues his research and the activity of Gruppo T, particularly with Devecchi. While exhibitions are suspended, Boriani focuses on his work as a designer and a teacher. Between 1971 and 1981 he conceives and realizes, also within educational activities, projects of participatory design with users at the scale of architecture, territory, and society. He taught at the Academy of Brera, at IED and at the Politecnico di Milano. In 1995 he moved to Curitiba, Brazil, where he lives and works. 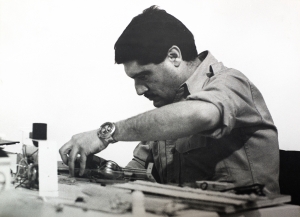